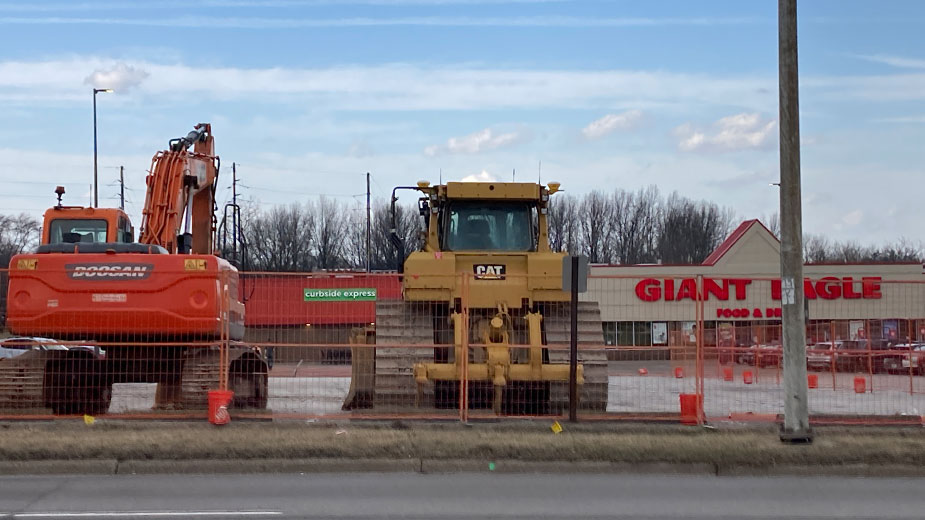 A Chick-fil-A restaurant is weeks away from opening on Mahoning Avenue. Just a few blocks away, site preparation has begun on a new Starbucks, in front of Giant Eagle.

Both places will cater to people who want their food and beverages to go – a reflection of  consumer trends.

The Chick-fil-A under construction at 5647 Mahoning Ave., west of state Route 46, is designed to handle a lot of cars at its drive-thru.

It will have entrances from Mahoning Avenue on the east and west sides of the property. All traffic will be funneled to a three-lane road on the property; the left lane will lead to a parking lot next to the restaurant for dine-in customers, while the other two lanes will be for drive-thru customers.

“This is the best traffic flow design I’ve seen for any business with a drive-thru,” said Darren Crivelli, Austintown zoning inspector. “It’s designed for maximum efficiency at the drive-thru.”

The drive-thru lane holds 44 cars on the property.

The dining room will be accessed through a door on the building’s west side. There will also be a landscaped patio for outdoor dining at the south end of the building. A retention pond has been added at the rear of the property to handle storm water.

“Once the landscaping is in, it will look nice,” Crivelli said. He expects the eatery and drive-thru will be exceptionally busy for at least its first few weeks. Motorists leaving the property will find it easier to turn right, and one exit might be designated right-turn only.

Chick-fil-A also owns land immediately to the east of the restaurant that will be left vacant for now, although the chain does plan to develop it in the future, Crivelli said.

Plans also call for a traffic signal to be installed on Mahoning Avenue at the west entrance to Chick-fil-A that will also provide access to the former Austintown Middle School property across the street. The traffic signal will not be installed until that land is developed.

“A fast-food restaurant alone is generally not enough to add a traffic signal,” Crivelli said.

Meijer’s, the grocery and department store chain, owns the former middle school site. The township approved its plan to construct a massive store there in 2016 but the project – originally set for a 2021 opening – has been delayed. Crivelli said there is currently no start date for construction.

Site preparation began this week for the new Starbucks that will be built at the corner of Mahoning and Kimberly avenues, in the southwest corner of the Giant Eagle parking lot. Giant Eagle sold the lot for $500,000 to Cardinal Realty of Canfield, which will build the store and lease the site to Starbucks.

The new 1,000-square-foot restaurant will be drive-thru only. It will have an outdoor patio, but no indoor seating, and will open this summer, said James Sabatine, principal of Cardinal Realty. The drive-thru oriented Starbucks building is part of a new concept that the coffee giant is rolling out across the country.

“They do better than [the traditional Starbucks sites],” Sabatine said, adding that it will “complement the Giant Eagle.”

The new store will be accessible from Kimberly Avenue and also from the Giant Eagle parking lot . There already is a traffic signal on Mahoning Avenue at the entrance to the supermarket.

“It will be easy in and easy out,” Sabatine said, noting that landscaping will be installed to beautify what is now “a sea of asphalt.”

Crivelli said an existing Starbucks on state Route 46 in Austintown will remain open.

Two other restaurants will either open or change location in the township.

It will be the second Korean restaurant to open in Austintown this year; Korea Restaurant opened on Route 46, just north of Mahoning Avenue, in February.

The influx of Korean restaurants is being spurred by the growing number of people from that country who are arriving in the Mahoning Valley, specifically Austintown, to work at the Ultium Cells battery plant under construction in Lordstown.

Also, Uncle Nick’s Greek Fried Chicken has relocated to an existing building at 4600 Mahoning Ave. It formerly was on state Route 46.

Pictured: Site preparation is underway for a new Starbucks in Austintown.