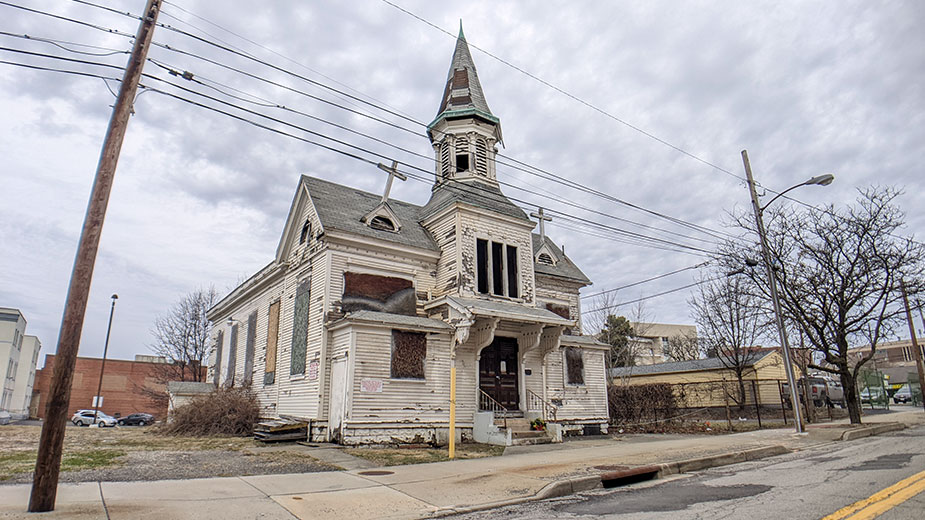 YOUNGSTOWN, Ohio — The Catholic Diocese of Youngstown will move forward with plans to demolish the shuttered Welsh Congregational Church.

Following a discussion that dominated most of the city Design Review Committee’s nearly hour-long meeting Tuesday, committee members approved on a 3-1 vote the diocese’s request to demolish the structure and a landscaping plan for the site, 220 Elm St. The committee unanimously approved a similar request to demolish and landscape the site of a nearby closed print shop, 208 W. Wood St., the diocese also owns.

Demolition of the buildings will proceed as soon as the diocese receives the required permits and landscaping will begin once the weather breaks, said Tracie Kaglic, president of Olsavsky Jaminet Architects Inc. Olsavsky Jaminet is the architectural firm working for the diocese.

The demolition requests were continued from the committee’s February meeting when members requested the diocese and Olsavsky Jaminet submit detailed landscaping plans for their review. At that meeting, Patrick Kelly, chief financial office for the diocese, shared a potential long-term plan for the sites that involved construction of a residence for priests.

Near-term plans involve a green grass panel on the surface of the two properties and plants similar to those at the nearby diocese-owned parking on Wood Street and around St. Columba Cathedral.

Representatives of the diocese, Youngstown State University, the city and Youngstown CityScape had been engaged in discussions for several years regarding a plan to relocate the historic church to another site. Most recently, those discussions centered on moving the building to a site near the Youngstown Historical Center of Industry and Labor, with a donor reportedly supplying the money to move the building and in line to provide additional funds to repair it.

First Ward Councilman Julius Oliver questioned why the diocese was willing to incur the cost of demolishing the church when an agreement was in place to move it, funds were being provided and the diocese would incur no liability. Oliver, who listened in on the virtual meeting, doesn’t serve on the design review committee but was engaged in discussions about moving the church.

Sharon Letson, Youngstown CityScape executive director, also said a donor had agreed to provide funds for the relocation of the church and “is committed should we be able to go forward with the project.”

Kelly countered several times during the meeting that while he was involved in several discussions, no written or formal agreement was put forth by the city, CityScape or anyone else, nor any demonstration that funding for the relocation and repairs was secured.

“We had timelines that we put in place for our future development. Those deadlines came and went,” he said. “That’s why we went forward with our plan.”

During the meeting, Kaglic showed participants in the meeting and other observers some recent photos of the interior of the structure, which was damaged by a 1997 fire.

“To me, this structure looks no different than any other old structure that has to be restored,” Oliver said.

While the church’s interior is in bad shape, “I don’t see it as any different than when we were in there years ago,” Letson said. The “bigger lesson” in all this is the city needs a historic landmark ordinance “to save historic structures so we don’t lose any more of them,” she added.

Committee member Bill D’Avignon, a former city community development director, said a proposal was made but never acted on by the city’s planning commission and City Council to create a historic commission. “Therefore it’s in our hands to determine whether this building warrants demolition,” he said.

Hunter Morrison, an urban planning consultant for the city, expressed particular concern about the beams of the structure. He acknowledged he had seen properties in worse shape but could not comment further on prospects for rehabilitating the structure without inspecting it.

“Typically when buildings of this condition are before the city for these matters, it’s because of extreme deteriorating conditions and they get demolished,” said T. Sharon Woodberry, city economic development director. “Usually when they reach this point, the end result is demolition.”

Oliver also asked whether the diocese had the right to take down the historic structure. City Law Director Jeff Limbian confirmed that it did, following due diligence. “They are perfectly within their rights to move forward and handle their property as they see fit,” he said.

Just before the vote, committee member Nick Chretien asked if the diocese would be wiling to wait another month before moving forward to permit further discussion among the parties involved.

Kelly said the diocese had a set price with its contractor based on a specific timeline for the work to be performed.

“We went through the formal procedure of requesting the demolition and that’s what we’d like the committee to vote on,” he said.

Chretien cast the sole “no” vote on the church demolition request. Committee member Jonathan Imler, an architect with Olsavsky Jaminet who also does work for the diocese, recused himself from voting on both its requests.

“We presented options and the diocese chose this option. As painful as it is, that’s what was chosen,” said Nikki Posterli, chief of staff to Mayor Jamael Tito Brown and the city’s director of community planning and economic development.

The committee approved two additional requests during the meeting.

One was by Alta Care Group for a 2,650-square-foot addition to its 711 Belmont Ave. building. The additional space will accommodate two group rooms and an activity space, said Kevin Willis, a principal with Strollo Architects. The brick and asphalt shingles will match the rest of the existing building.

In addition, the committee approved new signage for Rossi Business transitional Solutions, 147 W. Federal St. The company is changing its name from FEIC Financial. FEIC has been downtown since 1981.