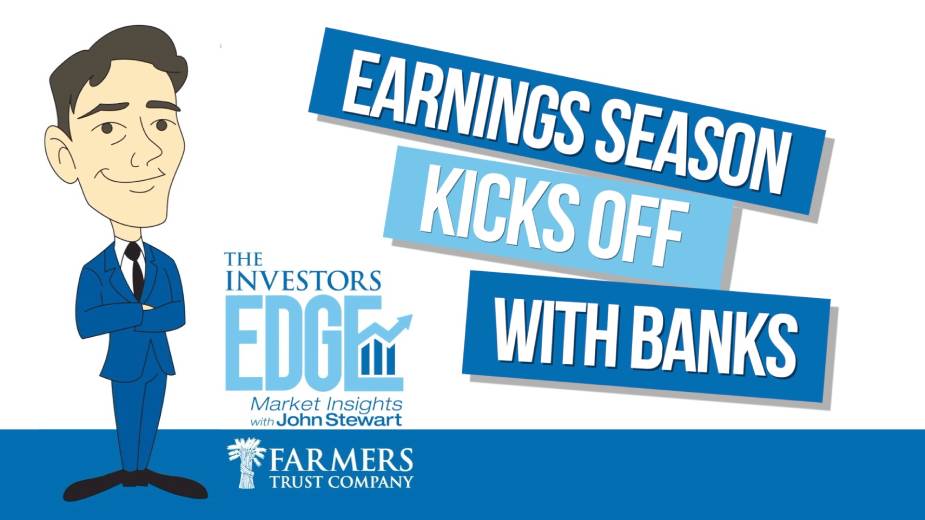 CANFIELD, Ohio — After some volatility to start the new year, investors have been focused on early earnings reports to give them an indication of where markets may be headed next.

Large banks began the parade of quarterly reports with JPMorgan first out of the gate. Despite reporting reasonably strong numbers shares of JPM dropped more than 10% in the 3 days following their earnings release.

Expectations were obviously running quite high going into the report, and many of the banks including JPMorgan were conservative with their loan loss reserves, which is an indication they may be nervous about the credit environment for 2022.

The financial sector was hot to start the year even as growth-oriented sectors like technology sold off. Nevertheless, the S&P Financials sector is now down more than 5% over the past week.

I warned that the road could get rockier as the Fed plans tighter monetary policy to combat inflationary pressures. For now, it appears that the earnings outlook is simply reinforcing that view.

One of the most important concepts to understand in the world of finance is the significance of rates of change. Most people think in terms of “good” or “bad”. What really matters, however, is “better” or “worse.”

Are things getting better or are they getting worse? The most money is usually made in the stock market when things go from apocalyptic to just plan awful. Awful is BETTER than apocalyptic.

Think back to April of 2020. The market had started to rebound despite COVID lockdowns and chaos. Many investors couldn’t understand why the market was rallying with all the bad news, but it was in the process of getting less bad – in other words, better. The world was not going to end.

The opposite is also true. Less good, is in fact, worse. A year ago, JPMorgan’s earnings were being revised up by roughly 15% while now they’re only going up by 2-3%. Even though going up is good, it is less good, which to the markets, is – you guessed it – bad. Nobody ever said investing was easy!

The Fed will be at it once again next week, deciding whether or not to get even more aggressive with its intentions to tighten monetary policy to combat inflationary pressures.

Recent comments by Fed governors indicate that they intend to wind down their asset purchase program by March, and then proceed to raise interest rates at least three times this year. There is also some discussion of letting maturing bonds run off their balance sheet, which would further act to drain liquidity from the system.

The hawkish turn in sentiment has likely been the primary driver of the recent volatility in equity markets.

Next Wednesday will be our first opportunity this year to see whether the Fed’s bark is more frightening that its bite. The Fed has been known to change direction quickly, like in early 2019 when they did a 180 from hiking rates to cutting them, which helped the S&P 500 rise more than 30% that year.

Buckle up, it could be an exciting ride.